Franz Schausberger represented Salzburg at the CoR plenary session from 6 to 7 February 2019: 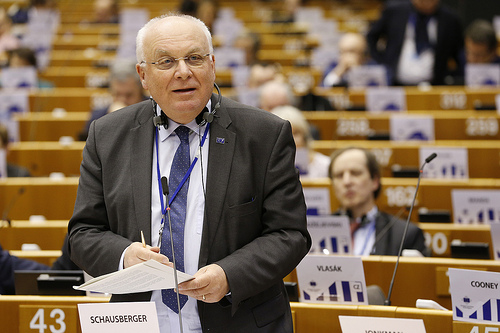 Franz Schausberger at the 133rd plenary session of the CoR
At the CoR plenary session, Franz Schausberger called for effective protection of the EU’s external borders and effective repatriation of illegal migrants. This means that, in line with the proposal of the Austrian EU Presidency, the European Border and Coast Guard (Frontex) needs to be increased as quickly as possible to 10,000 people. It is regrettable that this proposal of the Austrian Presidency has not found the necessary majority and that the measure has been postponed until 2027, despite the urgent need for immediate, effective action against the smugglers.
CoR meeting with EU Commissioner Oettinger: 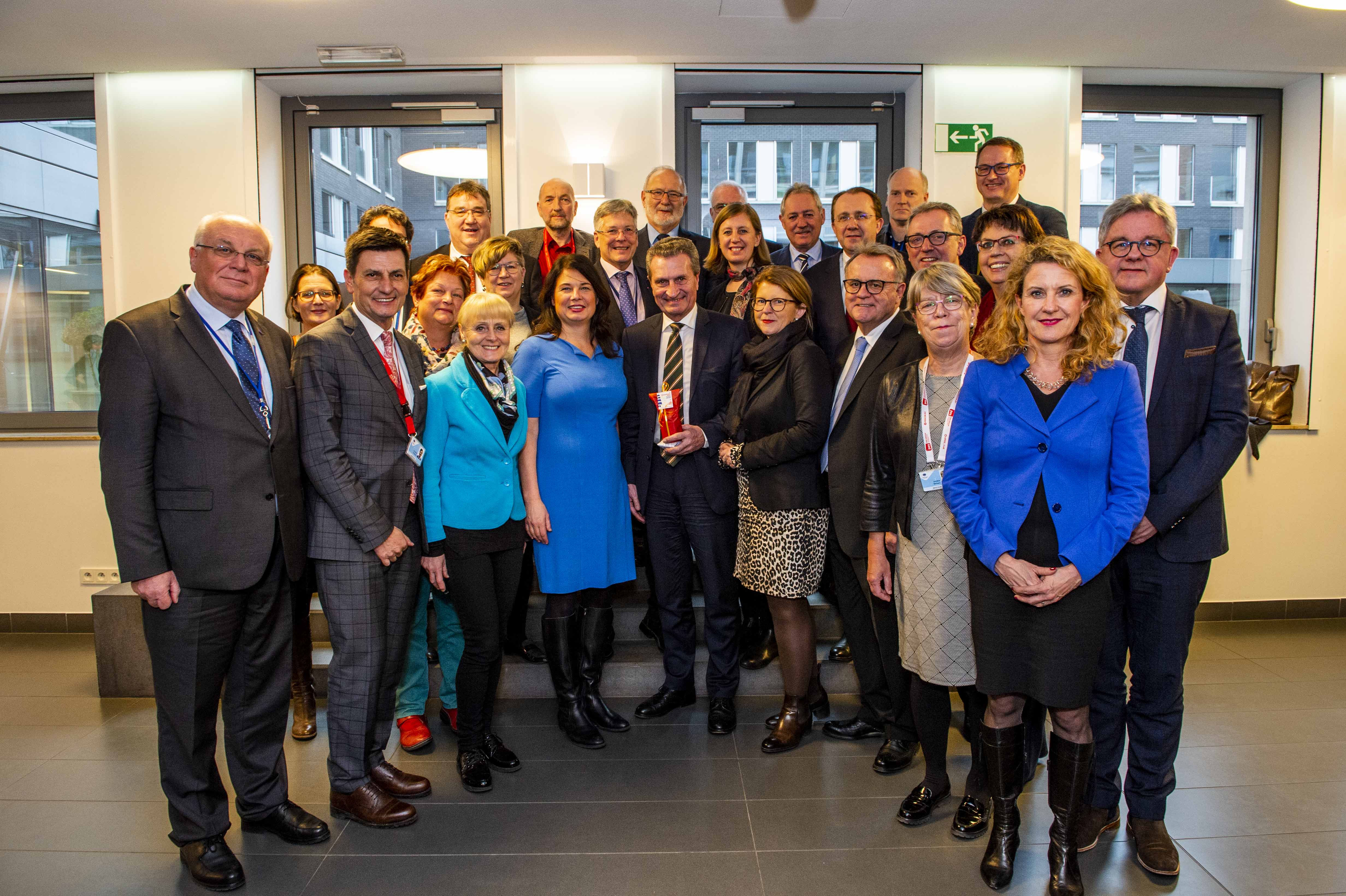 Group photo of the German and Austrian CoR Members with Commissioner Oettinger
At a meeting of the Austrian and German members of the Committee of the Regions (CoR) with Günther Oettinger, European Commissioner responsible for the EU budget, Franz Schausberger expressed his confidence that despite all the different positions currently being taken by the Member States on the EU budget, a compromise will finally be found, which will be acceptable Austria and which will be able to secure the cohesion policy that is so important for the regions and municipalities for the next financial period. Schausberger called for a substantial simplification of the bureaucratic requirements for the promotion of regional and local projects, as many countries are still unable to access the cohesion funds intended for them. 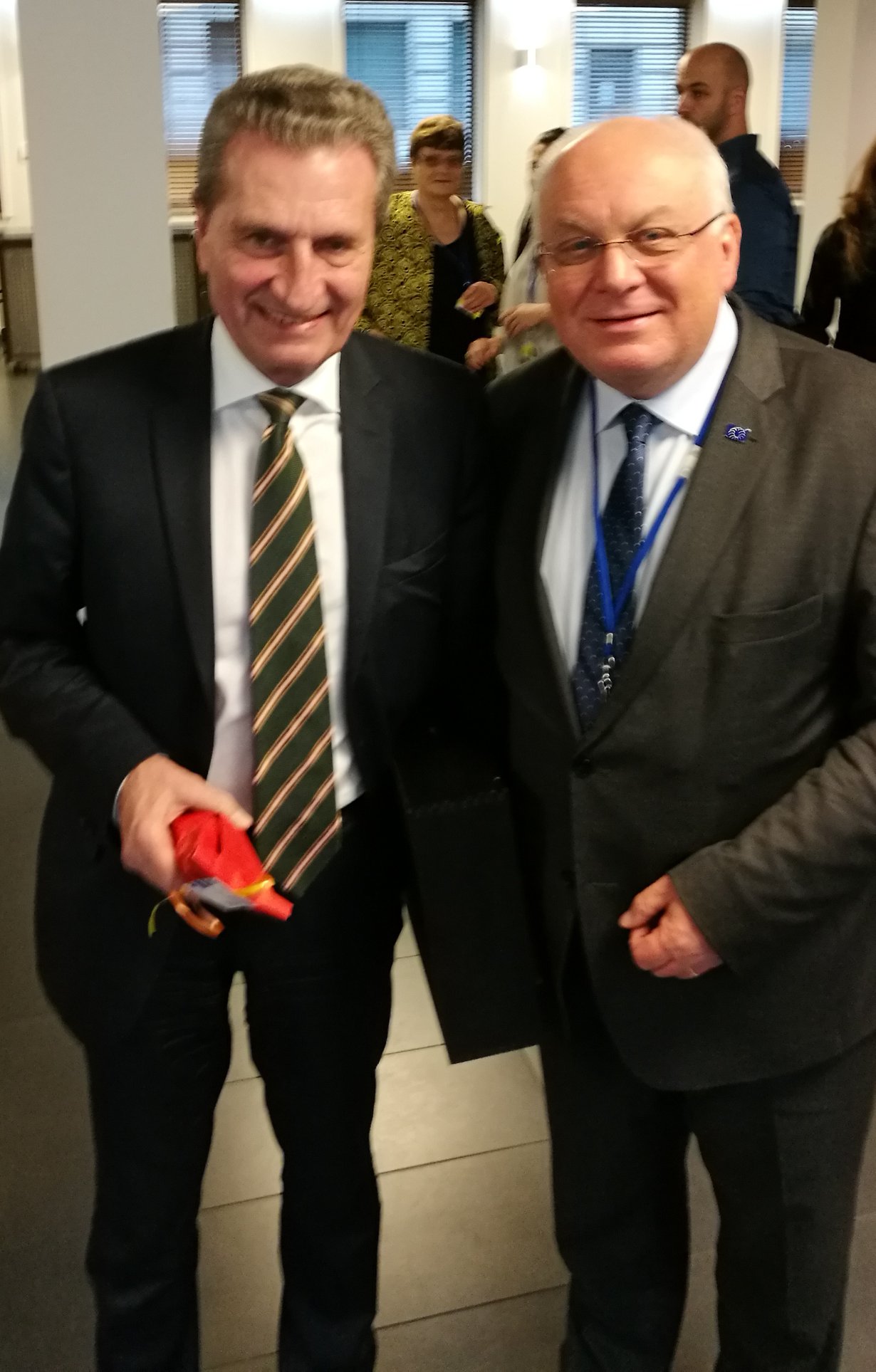 EU Commissioner Günther Oettinger together with Franz Schausberger
Provincial elections in South Tyrol 2018
After the provincial elections in South Tyrol on Sunday, 21 October 2018, when the South Tyrolean People’s Party (SVP) lost votes and the Lega gained some, the formation of a government was rather difficult, even though a co-operation between the two parties was obvious due to the language group proportional representation system. The Italian language group must be represented to a certain extent in the provincial government in South Tyrol. As an alternative, only a minority government of the SVP remained.

However, quite a lot separates the two parties ideologically. Many SVP officials reject the positions of the right-wing populist Lega in the areas of Europe and migration. There is also some doubt as to how serious the Lega – co-governing in Rome – is with the autonomy of South Tyrol.

With 65 votes in favour, 11 against, seven abstentions and a heated internal debate, the SVP voted in favour of negotiations with the Lega. They referred to it as “technical cooperation” and agreed on a so-called “catalogue of values”.
On 17 January 2019, the former Governor Arno Kompatscher (SVP) was re-elected governor for a second term with 19 of the 35 votes of the provincial parliament in favour of him.
Kompatscher emphasized that despite his new coalition partner, he would continue to stay critical on certain points of the Roman government. He explicitly referred to the catalogue of values contained in the coalition agreement, in which both parties profess their commitment to Europe and to social peace, to protecting the German and Ladin-speaking minority, to the further development of self-government, and to oppose any new centralism, exclusion and discrimination. He also renewed his offer to cooperate with the opposition. 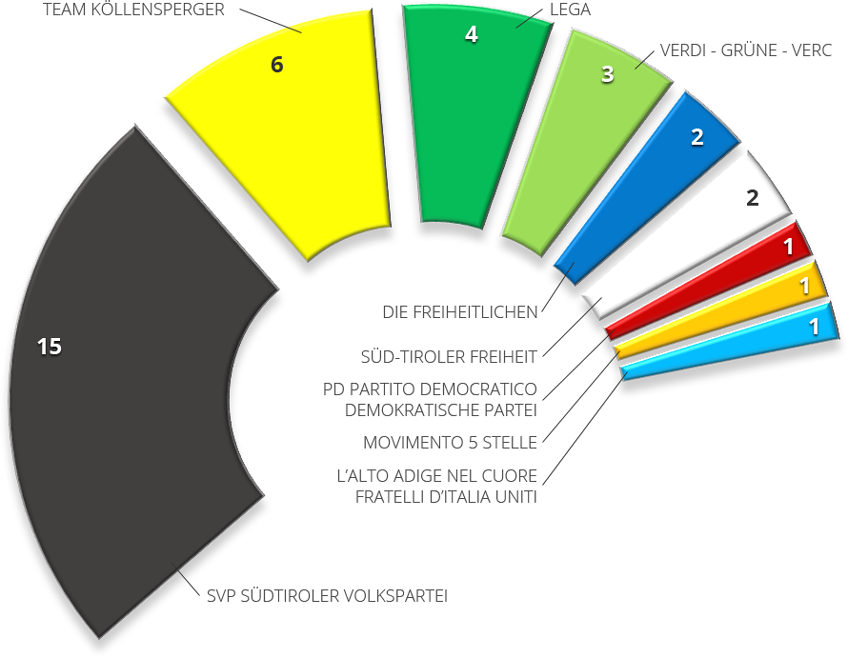 On Friday, 25 January 2019, the vote on the new provincial government took place in the South Tyrolean provincial parliament. Of the 34 delegates present, 18 voted in favour of the proposal of Provincial Governor Arno Kompatscher, 16 against. 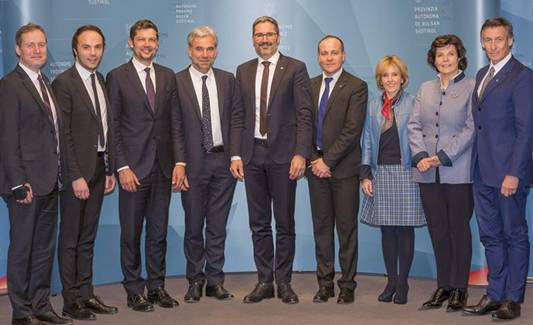 Delegation from Republika Srpska in Vienna:

A delegation from the Republika Srpska, a constituent republic of Bosnia and Herzegovina, headed by President Željka Cvijanović, as well as the chairman of the board of the Institute of the Regions of Europe (IRE) Franz Schausberger, met the Chairman of the Foreign Affairs Committee of the Austrian Parliament, Reinhold Lopatka (ÖVP) for an in-depth talk on Thursday, 24 January 2019. The central topic of the talk was the political situation after the elections in Bosnia-Herzegovina in October 2018, which turns out to be very complex.

Austria’s relations with Bosnia-Herzegovina are close and very dense as well as very well developed at all levels. This has many reasons, historical and current ones. Austria has received 90,000 refugees during the Bosnian war in the 1990s. Around 20,000 still live in Austria today. Austrian companies are the strongest investors in Bosnia-Herzegovina.

From right to left: Željka Cvijanović, Reinhold Lopatka, Franz Schausberger, Mladen Filipovic (Representative of the RS in Vienna)
Thanks to friends, members, promoters and sponsors: 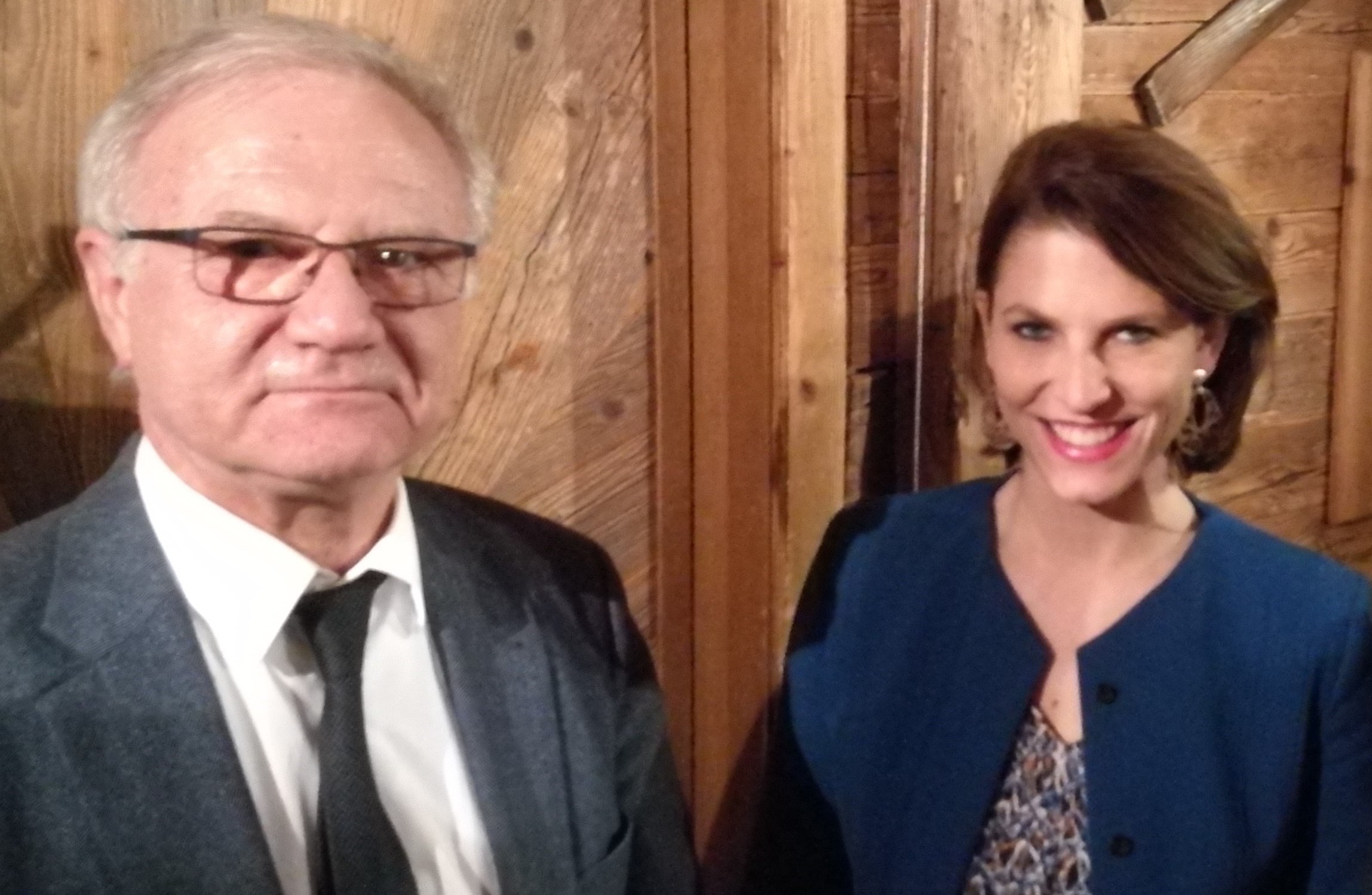 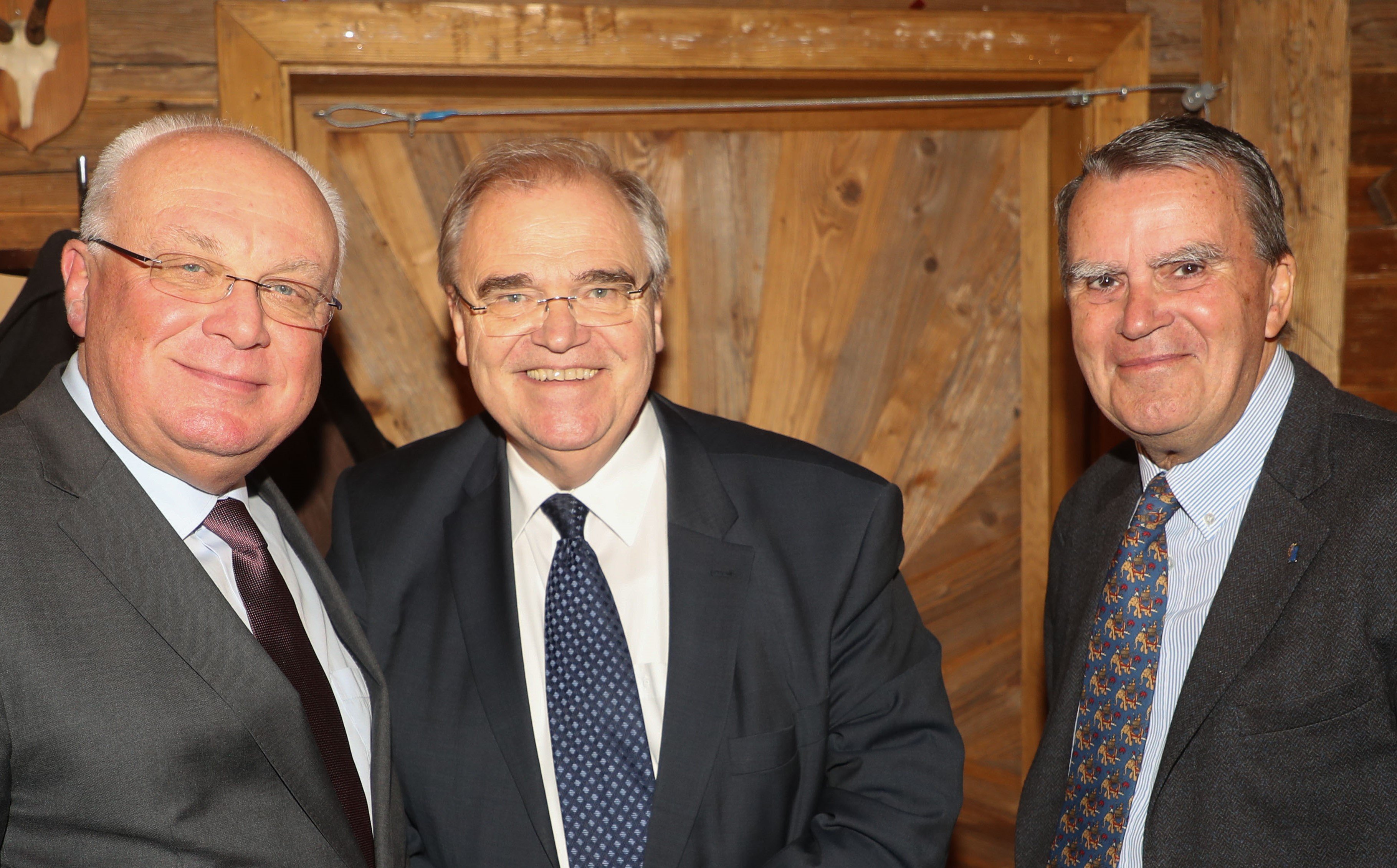 Roland Bimo, Karoline Edtstadler | Franz Schausberger, Wolfgang Brandstetter, Helmut Falschlehner
After a very successful year with numerous events in Austria  and abroad and an acclaimed conference “Europe 1918 – 2018 – 2118″ the Institute of the Regions of Europe (IRE) invited to a small and welcoming New Year’s reception on 16 January in the “Almhütte” the Stiegl Ambulance in Vienna.

IRE board member Franz Schausberger, his two board colleagues Stefan Eder and Helmut Falschlehner, Gerhard Feltl from IRE-Förderverein, and secretary general Joachim Fritz thanked the numerous members, friends, supporters and sponsors of the IRE for their support, without which the extensive program would not would have been feasible. Among the many present were Secretary of State Karoline Edstadler, former Vice-Chancellor Wolfgang Brandstetter, the Albanian Ambassador Roland Bimo, Ambassador Arthur Winkler-Hermaden, the representative of the Republika Srpska in Austria, Mladen Filipovic, the President of the Political Academy, Bettina Rausch, the Director of the House of History Austria, Monika Sommer, the Director-General  of ZAMG, Michael Staudinger, the Procurator of the Order of Saint George, Vinzenz Stimpfl-Abele, Alexander Picker of Transparency International Austria and Ministerialrat Franz Pietsch. Gerhard Gamperl from Verbund, Paul Pasquali from Raiffeisenbank International, Gerda Beck from Erste Bank, Andreas Kettenhuber and Marcus Maierfrom Kommunalkredit, Erik Kroiher from Kapsch, Ernst Rosi from Syngon Advisory GmbH and many more. 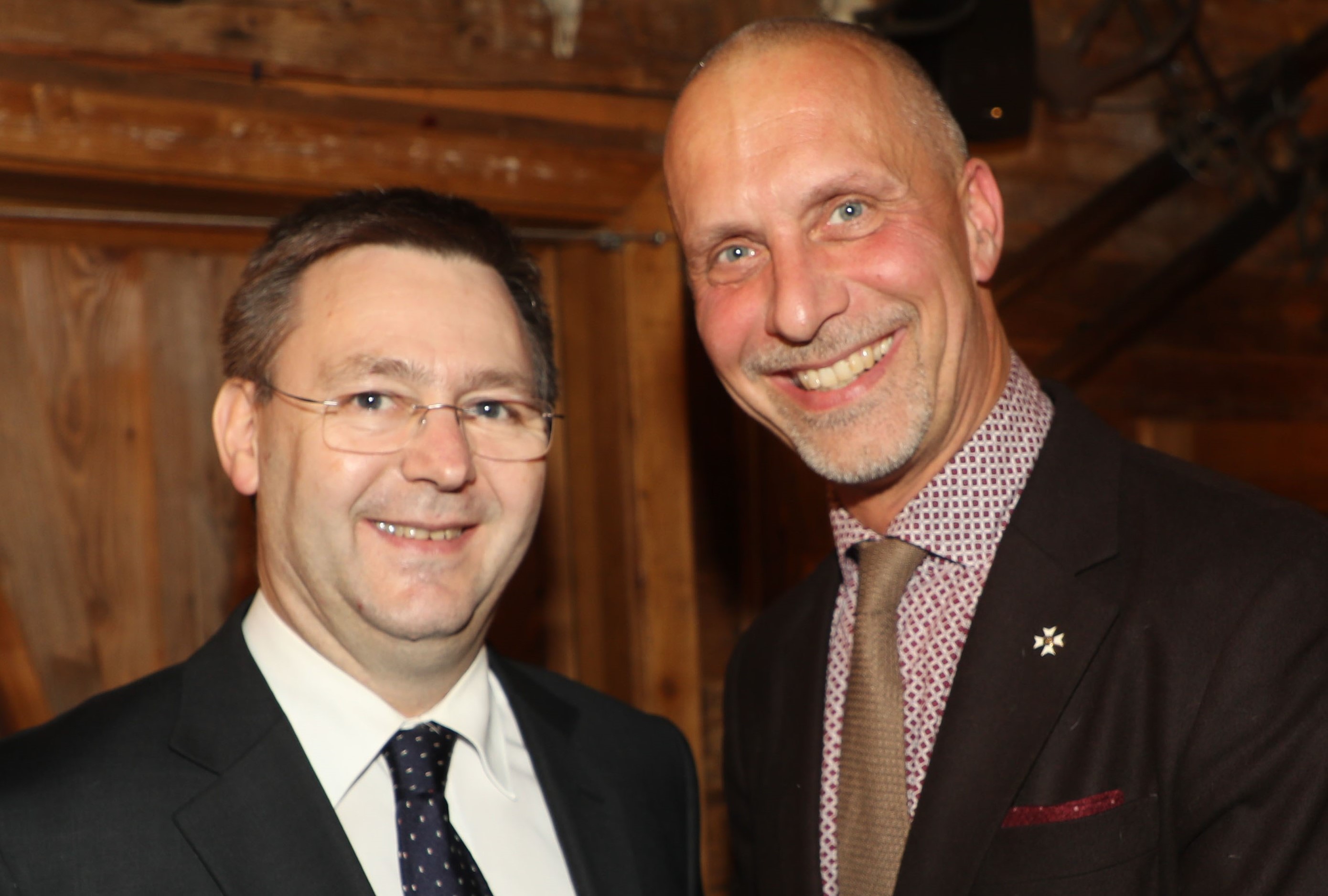 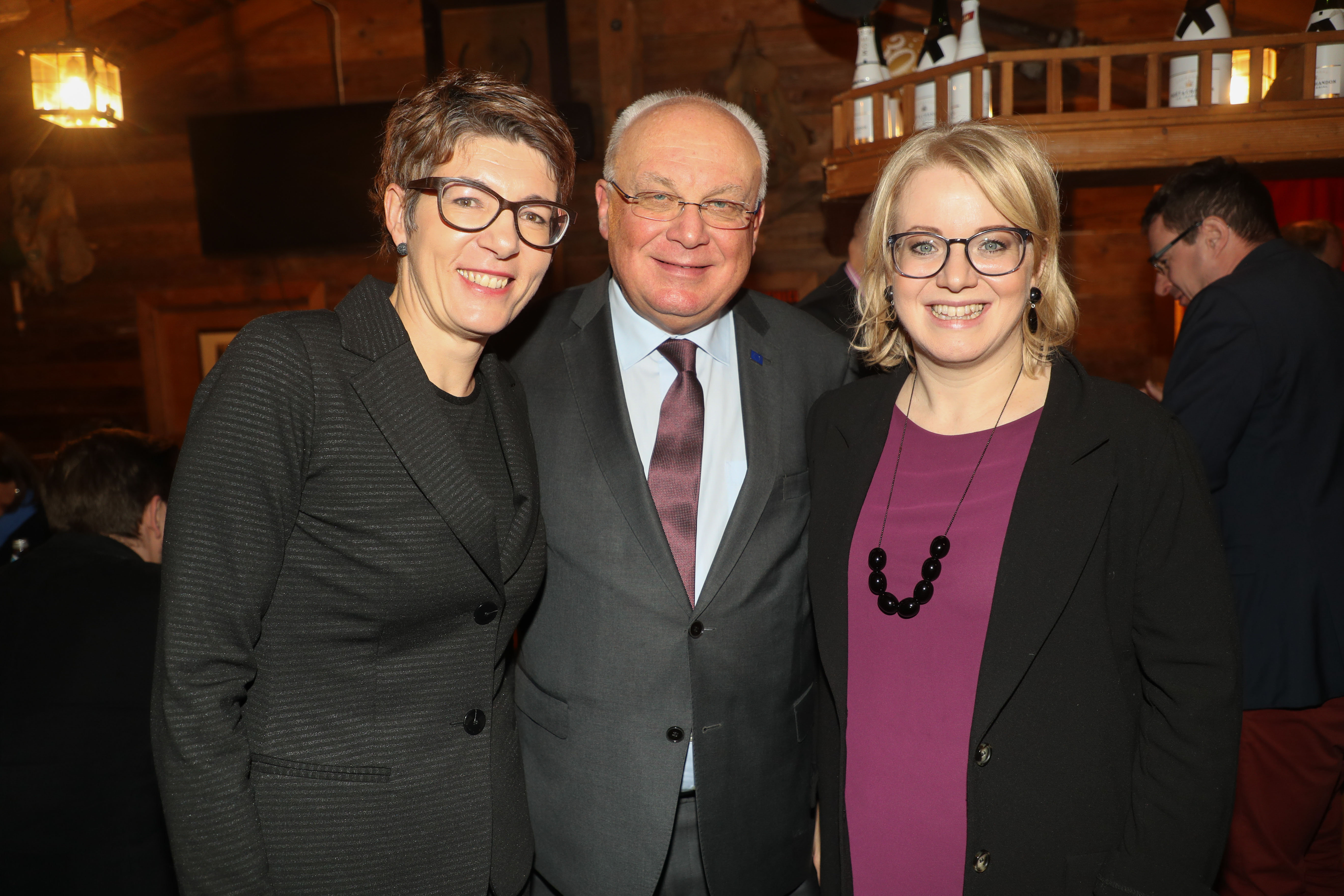 The Albanian territorial reform was the focus of deliberations of the Working Group Western Balkans of the European Committee of the Regions (CoR), which met on 13th of November 2018 in the Albanian capital Tirana. Under the chairmanship of Franz Schausberger, representative of the state of Salzburg in the CoR and IRE board of directors, the CoR members discussed with numerous national and local representatives of Albania the effects of the reform and its implementation.

The Government of Albania since September 2013 started the process of an administrative and territorial reform aiming the reorganization of local governments units, to empower local and regional governments by decentralizing more functions and competencies and allocating more public funds to them. In July 2014, the Parliament approved the law “On the territorial and administrative division of local government units” reducing the number of Local Government Units from 384 to 61 municipalities. This law entered into force after local elections held in June 2015, and since then the local government in Albania operates through 61 municipalities. The 61 new municipalities should have more opportunities to take part in international cooperation projects; absorb more funds from EU and other donors; and enjoy larger bargaining power vis-à-vis the central government, as well as a greater scope for inter-municipal cooperation.

For the first time in Albania the central government should be obliged to consult local government representatives regarding decentralization, local finances and municipal functions. Through the newly established Consultative Council of Central Government and Local Self-Government both levels of authorities will be able to exchange and discuss any policies, laws or initiatives that affects local government and communities.

Territorial and administrative reform in Albania, is proceeding slowly and has created confusion, a mission of Congress of Local and Regional Authorities of the Council of Europe that visited Albania in 2016, said. The budget of the Albanian government does not correspond to a net increase in the local authorities’ resources. An Italian study comes to the conclusion that the territorial and administrative reform has not generated the expected results. Almost 90 percent of the revenues still come from the central government’s unconditional transfers. Therefore, the Albanian Government should build capacities and skills, and train the employees of each level of government that currently benefit from international assistance.

In another session experiences with examples of municipal reform in other countries (Ukraine, Denmark and Austria) were presented.

The youngest IRE member of the year 2018 comes from Albania:
The Institute of the Regions of Europe (IRE) is pleased to announce a new member of the IRE- network, the city of Kukës in northern Albania. The city has 16.700 inhabitants and is the capital of the district of the same region. The city is located in the middle of the northern Albanian mountains.
Historically, the area was mainly associated with Kosovo and the city of Prizren. Up to the Kosovar border, there are only 15kilometres as the crow flies.
Kukës was first mentioned in 1571 as Kukufic. At that time it consisted of only a handful of houses and lay in the deep river valley. From 1912 to 1921 it was alternately controlled by Serbs, Bulgarians andAustrians. In 1925, the city became the center of the district of the same region and the prefecture. In 1962 they began to build on a plateau, the new city. The aim was to relocate the inhabitants of Old Kukes there. In 1978, Alt-Kukes finally disappeared forever in the floodwaters of the long reservoir, which is over 100 km long and is used to generate energy. 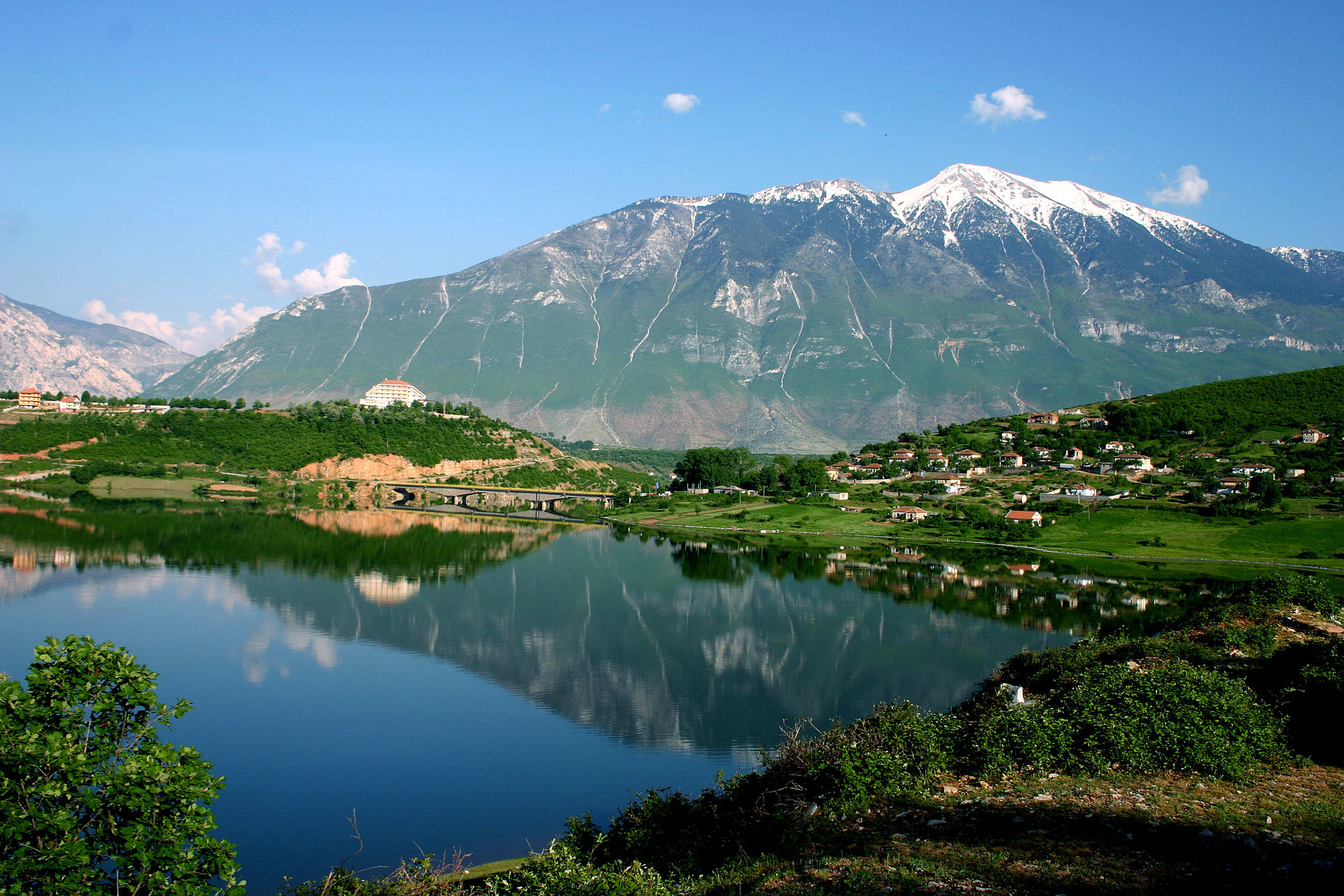 During the Kosovo War in 1999, Kukës briefly became known when tens of thousands of Albanian refugees from Kosovo found asylum in Kukës and hundreds of journalists reported the events.

The region around Kukës experienced a boom during communist rule thanks to mining, timber industry and state agriculture. At the old trading place more and more enterprises were settled and in the environment copper and chrome mined.

In 2006, work began on the construction of the A1 motorway from Durrës to Kosovo, which was officially opened in June 2009. This new connection is 177 kilometers long and now allows a fast, mostly four-lane connection between Kosovo and the Albanian coast. The United Arab Emirates financed the construction of a new “Zayed” Airport, which was not actually put into operation. 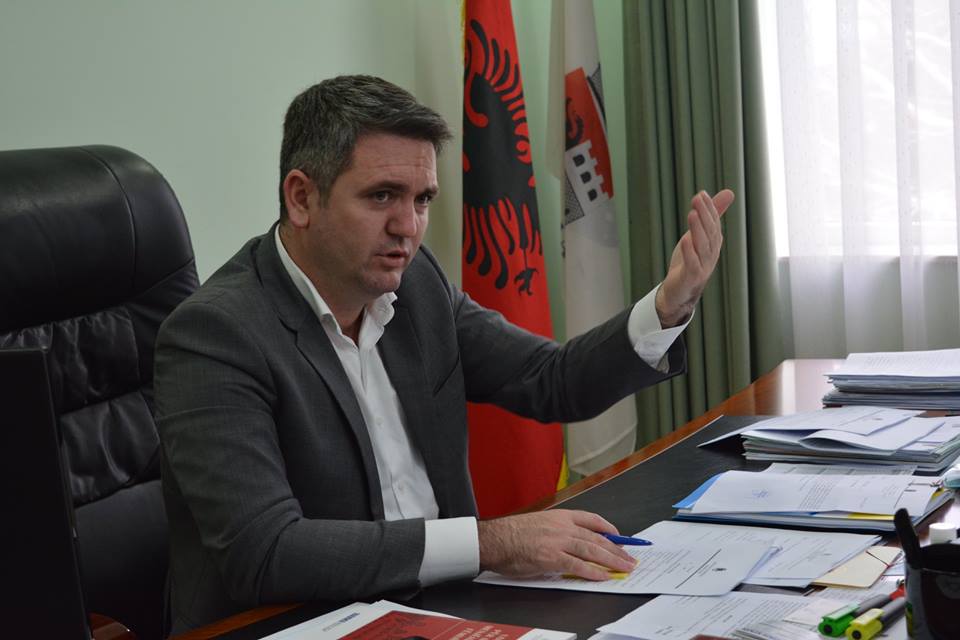 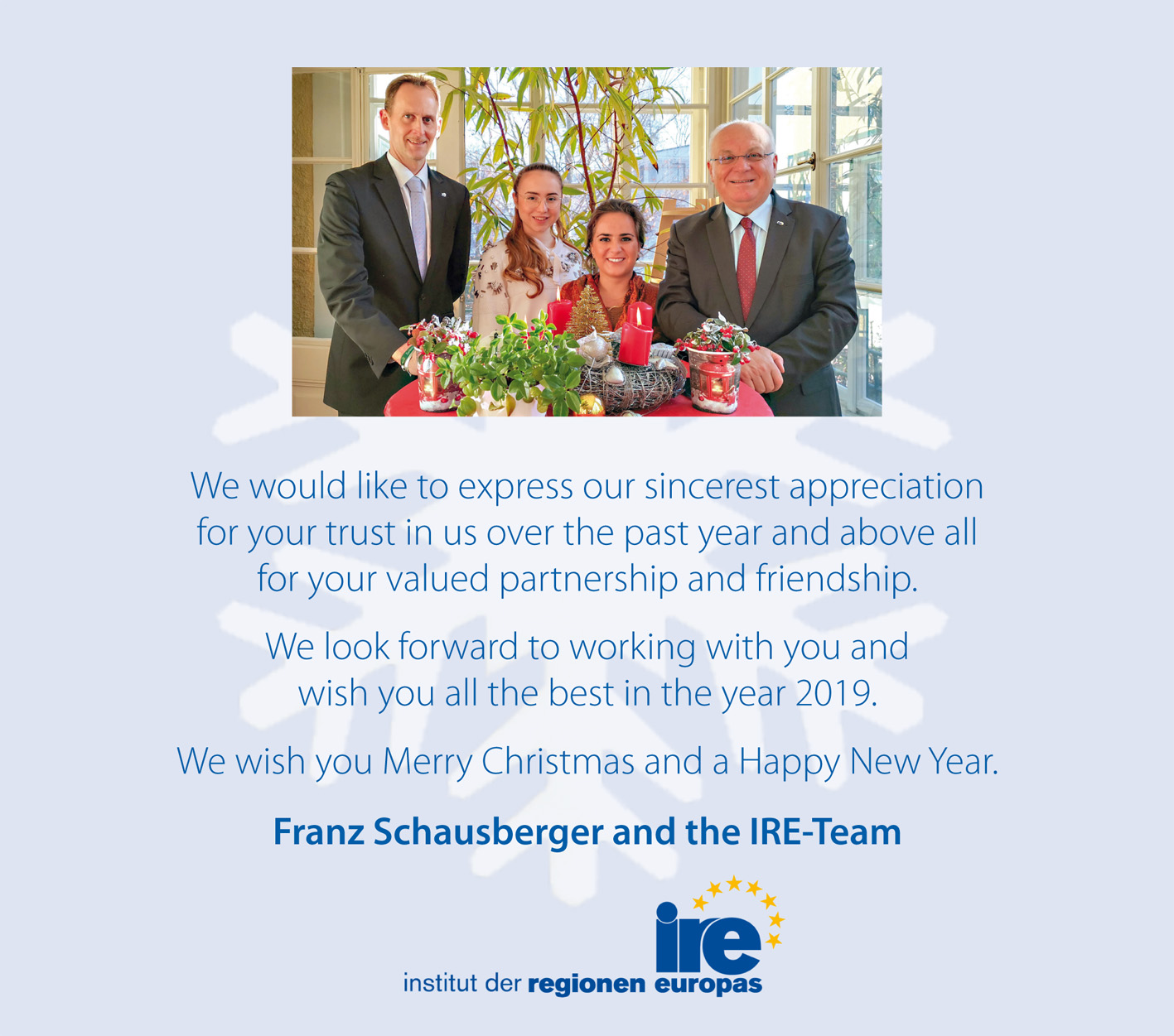 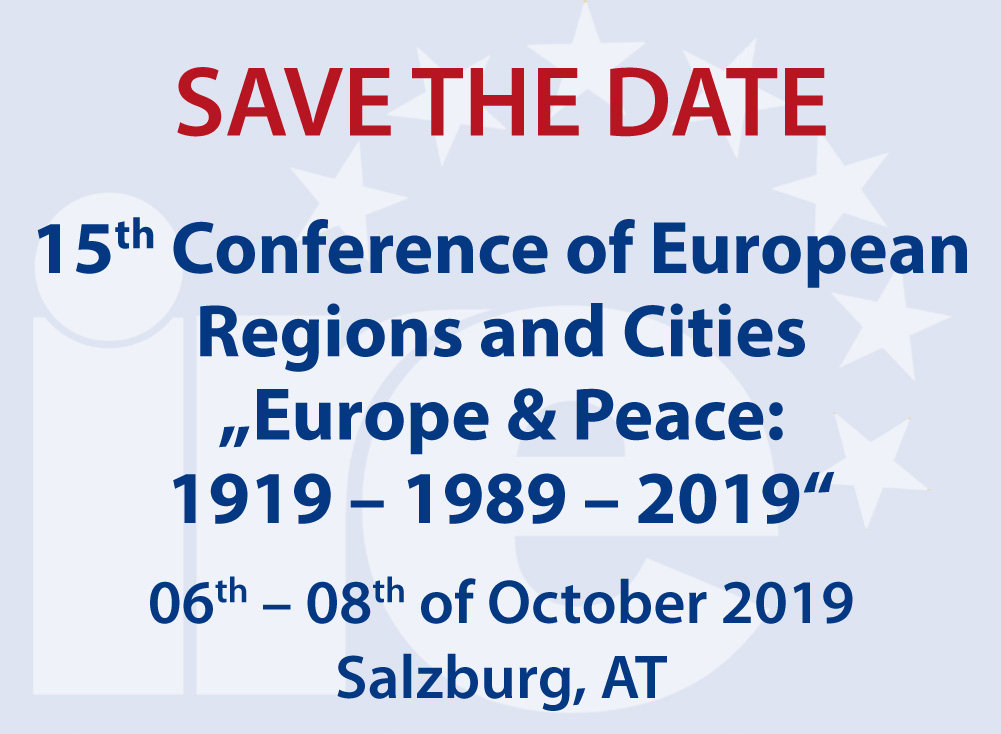 For the eight time, the Institute of European Regions (IRE) is organising an International Expert Conference which is devoted to the topic of “Mobility in Smart Regions – supranational transportation concepts in Europe”. Venue is the Cultural Center in Hallwang near Salzburg, Austria. 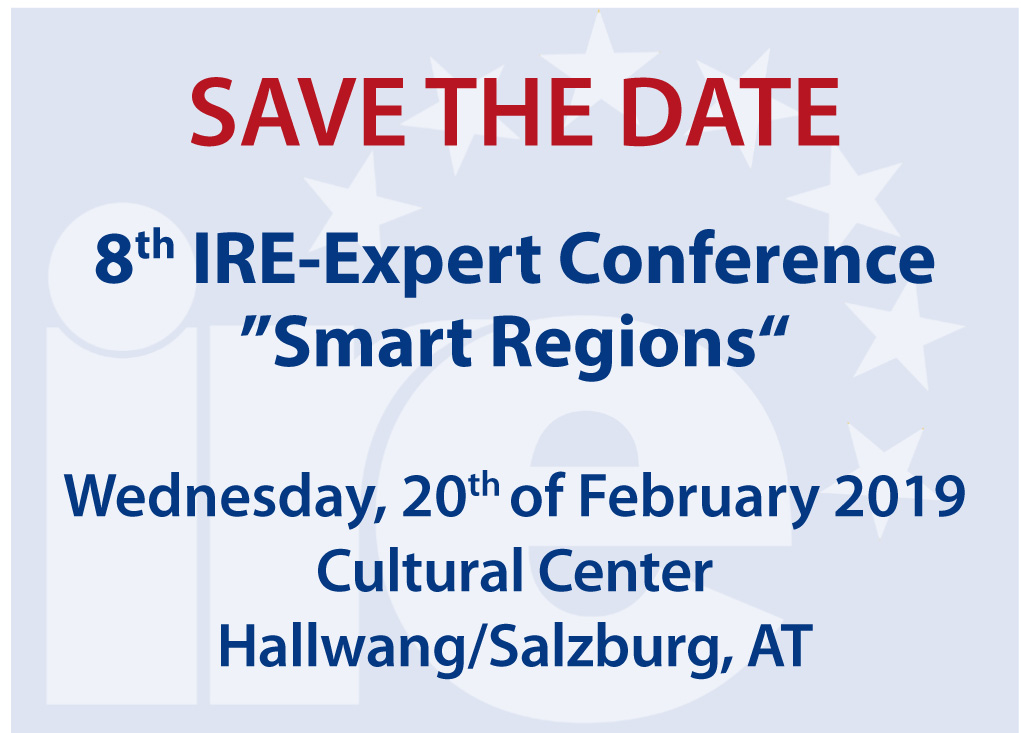